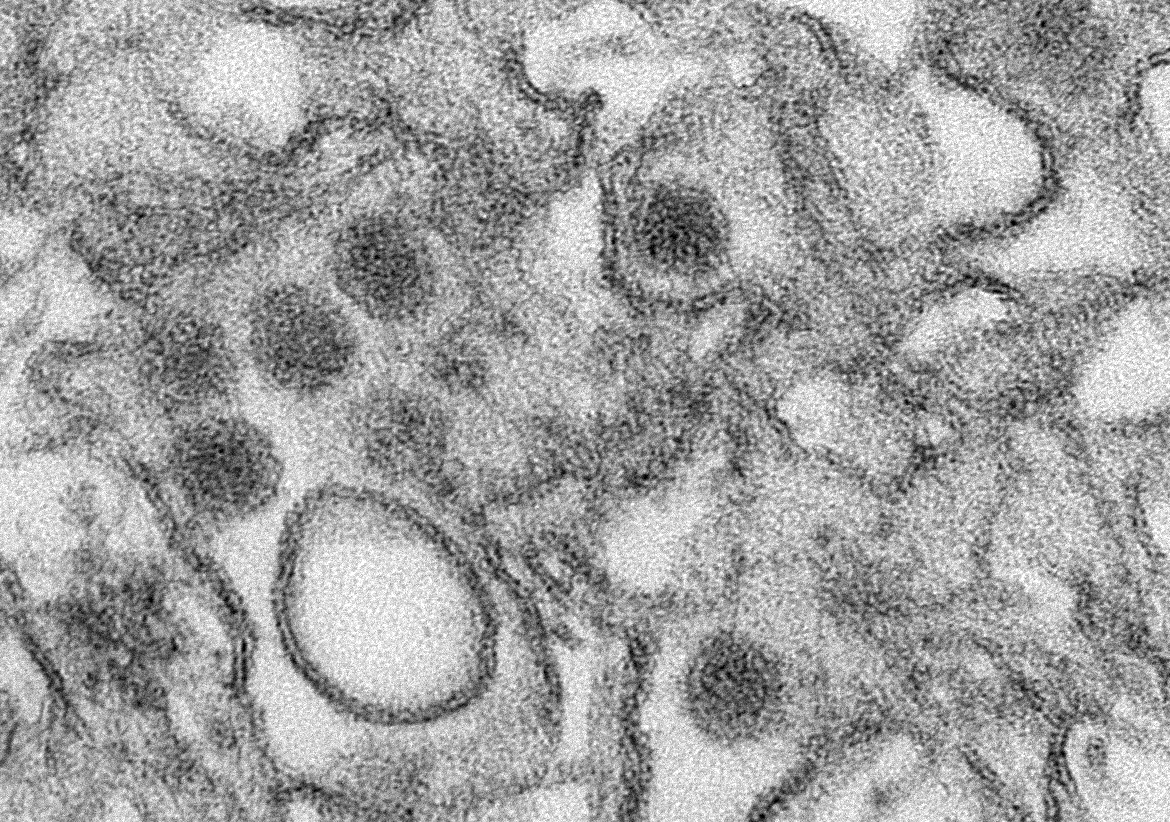 Photo: Cynthia Goldsmith. Electron micrograph of Zika virus. Virus particles are 40 nm in diameter, with an outer envelope and a dense inner core.

Zika is a fast-spreading infection with somewhere over a million people infected in Brazil this last couple of years. But it has not been proven to be a rise in microcephaly or that Zika is the cause. Until more is know, women are advised to try to avoid infection or locations where the mosquitos are common. Doctors are advised to consider testing a woman from that region who has symptoms.

You can find the official report from the Brazilian Ministry of Health. It is in Portuguese, but it was easy to translate a paragraph from at a time with google translate.

Table from the official report from the Brazilian Ministry of Health

The important point is that the number of cases is not yet confirmed. They are being investigated individually to see if the diagnosis is confirmed. At the last report, only about a third of the total investigated were confirmed (270 confirmed, 462 discarded).

Table from the official report from the Brazilian Ministry of Health

These cases will need to be further investigated to see if the mother had zika — and then compared with the background rate of zika to see if they can make a correlation with the virus.

One complication is that the reporting system is unclear. These are not just cases of microcephalic babies found at birth. They are including in the reports "newborn alive, stillbirth, miscarriage or fetal microcephaly and/or malformation of the CNS" (translated from portuguse). CNS is central nervous system. Miscarried babies, early pregnancies losses have a higher rate of microcephaly, but most rates of microcephaly are only based on babies discovered at birth. This may be one reason for a supposed rise in numbers.

So currently as of this most recent report, they have so far investigated 17% of the total accumulation of 4,100. Seven hundred and twenty were reviewed, and microcephaly confirmed in only 270 of them. The investigation still has a long way to go but it is not unlikely the rate of diagnosis error will remain similar. If so, the actual number may be only about one third of the total reported.

Perhaps that might make people less fearful if they realize the numbers are probably not as high as reported.

The investigation was called for in late December of 2015, and the first report was made in mid January 2016 — which is when the media got it. All reports read something like "It has not been previously reported that Zika can cause microcephally or birth defects" — which is interesting because this is not a new disease. At this time it is all fluid, even including whether or not there has been an increase in microcephaly. And if so — then what are the potential other causes: new malarial vaccines? High use of abortives purchased over the counter (abortion is not legal in the country), use of thalidomide, which also can cause microcephaly if given during the correct window of development; other windows cause limb deformity. it is legal and in wide use there over-the-counter with millions of doses sold annually. Some new herbal fad? Lingering effects of radiation or pesticide use or current herbicide use? Some odd brand of routine prenatal supplement? Perhaps it is as simple as someone using the wrong measuring chart! This seems actually possible, because most of these babies aren't the infamous "pinheads", but are just slow growing postnatally.

Brazil's mining industry has contaminated huge regions with mercury, arsenic and lead. Each of these are known to affect brain grown in the fetus and early months after birth.

Toxoplasmosis causes similar malformation and is rampant in Brazil with estimates as high as 60% of the childbearing population testing positive. At this point in time, there is no proof that Zika is the cause of an increase in microcephaly in Brazil or that there even has been a large increase. It is being investigated to confirm an increase and to find the cause, but the investigation has just begun.

In the meantime, delaying travel or even delaying pregnancy for a half year or so might be wise until we get some solid answers.